Prior to our last USA trip I was asked what my favourite American pie was. My response was that it was like trying to select my favorite star in the sky! I know, kind of corny, but what can I say, I love pie.  Inevitably it sparked the favourite pie conversation and all the different pies out there. So I set myself a mission….to eat my way though America and try as many pies as possible. It was a tough task, but I was up for the challenge. And here is what I found…

Is it wrong to declare a devotion of undying love to a pie? Well I did. I first tried key lime pie back in ‘99 on my first voyage to America. Heavenly mouthfuls of sweet pie with a punch of sour lime to balance it out. Originating from the Florida Keys where citrus fruit has been grown for centuries, this has long been a southern favourite. An absolute must. Delicious!

Everyone loves apple pie. Sweet crust pastry dusted with sugar, stuffed high with chunks of apples and baked till tender. Americans love their apple pie! Found in every diner and many restaurants all over the land, many variations can be found – from regular apples with sugar or even spiced with cinnamon, all spice or nutmeg. Which ever variety you try it’s sure to be delicious American apple pie.

Not just a Christmas treat, cherry pie is enjoyed all year round. Plump cherries are simmered and stewed then baked inside a sweet pastry case until golden brown. Cherry pie is one of the most popular desserts around. Simply served with a scoop of ice-cream, be sure to try the varieties on offer such as cherry and strawberry or cherry and rhubarb.

Pumpkin pie is most popular during the fall when pumpkin is in season and throughout the winter months. It’s of course available year round in cafes and diners but Thanksgiving is the time this pie really shines. As traditional as the carved turkey, pumpkin pie is a staple of any American Thanksgiving dinner. Sweet and full of spice, this pie is best enjoyed with a big dollop of double cream on top or vanilla ice cream on the side. 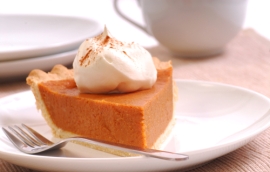 Technically this is a cake, but it’s referenced to as a pie and absolutely worth a mention. Simple, delicate and decadent. Originally created in 1856 at the Parker House Hotel in Boston for its discerning guests, Boston cream pie is a sponge cake split in two, filled with custard and cream and topped with a thick chocolate ganache. This is mouth-watering stuff! 1996 saw this popular dish declared the official dessert of Massachusetts.

Check out our post on our favourite American foods to indulge on.