Top 5 Must See US Capitol Buildings

If you’re a traveller who has an appreciation for inspiring architecture or one who simply enjoys acquainting yourself with a city through its history then look no further than a visit to one of the U.S.A.’s fifty state capitol buildings.

Like great cathedrals looking to welcome and inspire, these shrines to state government were built to impress – and the small towns and big cities that surround these great buildings are often just as fascinating.

Here’s a list of the top five state capitol buildings that should not be missed.

Located in beautiful Madison, the Wisconsin State Capitol is the only state capitol building to sit on an isthmus. Designed by architect George B. Post, work began on this impressive four winged, domed structure in 1906 with completion in 1917.

The stunning rotunda consists of Mediterranean marble and Wisconsin granite. Above the rotunda sits one of the largest domes in the world and the only granite dome in the United States. It is adorned on top with a three-ton bronze and gold leaf statue sculpted in 1920 by Daniel Chester French of New York (best known for his Abraham Lincoln sculpture at The Lincoln Memorial in Washington). The capitol building was designated a National Historic Landmark in 2001.

Exemplifying 19th century architecture, the state capitol building of Iowa in Des Moines was built between 1871 and 1886. Designed by the prominent 19th century Chicago architect John C. Cochrane, this is the only five domed capitol in the United States.

Each dome is beautifully decorated with gold and topped with a golden lantern. The commanding central dome is gilded with 23 carat gold leaf and has an awe-inspiring interior view. The grand rotunda is made of imported marble as well as Iowa woods of Oak, Cherry and Walnut. The dignified and stately interior of the building is filled with historic displays and art work. The senate chamber is particularly stunning with its intricately designed French chandeliers made of crystal and brass. 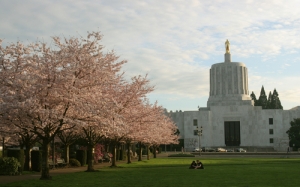 A truly impressive structure, this remarkable capitol building in Oregon was created mostly from marble, at a time when the nation was in the grips of the Great Depression. Dedicated by President Franklin Roosevelt upon completion in 1938, this is one of only three state capitols built in the art deco style.

The interior incorporates lovely art deco styles and is most noticeable in the beautiful dome interior with its paintings and murals. The handsome senate and house chambers are also a glimpse into 1930’s design with beautiful murals as focal points, depicting scenes in Oregon’s rich history.

Overlooking downtown Nashville from stately Capitol Hill, the Tennessee capitol building is a wonderful example of Greek revival architecture.  Built between 1845 and 1859 by renowned architect William Strickland, this capitol was recognised as a historic civil engineering landmark in 2003 because of its extensive use of stone and early use of structural iron.

Tennessee limestone was used for both the exterior and interior of the building.  A student of Benjamin Latrobe, Strickland’s design for the building incorporated a cupola instead of a dome making it one of only a handful of capitols not to include a dome.

History abounds at the Tennessee capitol and Strickland himself is entombed within the capitol walls.  The eleventh president of the United States James K. Polk and his wife Sarah are buried on the east side of the capitol grounds.

Nashville was the first southern capital to fall to the Union army during the American Civil War in 1861 and the city along with its capitol building remained heavily fortified as a strategic Union strong-hold until the war’s end in 1865.   The capitol building became a National Historic Landmark in 1971.

The Virginia state capitol in Richmond was completed in 1788 and houses the Virginia General Assembly, the earliest elected body in theWestern Hemisphere.  The General Assembly dates back to 1619 which was known as the House of Burgesses until 1775.

The General Assembly continues to meet in this historic statehouse which owes its design to Thomas Jefferson.  Jefferson’s design for the capitol marked the beginning of the Classical Revival movement in the U.S. which influenced the design of government and public buildings throughout the nation.

The building went on to become the capitol of the confederacy during the American Civil War from 1861 to 1865.   President Abraham Lincoln toured the capitol on 4 April 1865, entering the chamber of the vanquished Confederate congress just 10 days before his assassination on Good Friday, 14 April.

From the simple and understated to Gothic and Greek Revival to art deco inspired 1930’s flair, each capitol is a shining monument to the state it represents and a lasting tribute to the great architects, citizens and visionaries who designed and built them.