Hawaii is a cosmopolitan destination offering modern elements with historic flair. Hawaii’s diverse elements have formed a unique South Pacific culture that beckons, whose people are eager to welcome visitors with that famous Aloha Spirit.

When we arrived in Honolulu we were keen to visit the famous sights on our ‘must do’ list. My partner and I had different ideas of what was going to make our Hawaii holiday a memorable one.

You can see our Hawaiian holiday was going to contain compromise! But there was one particular ‘must do’ that surprised even me.

Beyond Waikiki Beach is historic Pearl Harbour with its tragic and haunting past.

Bombed by the Japanese on December 7, 1941, the attack was a shocking, unexpected and brutal attack on American naval forces. The Japanese plan was to halt the US Naval Pacific Fleet from interfering with Japan’s goal for Pacific military dominance, thus beginning U.S. involvement in WWII. 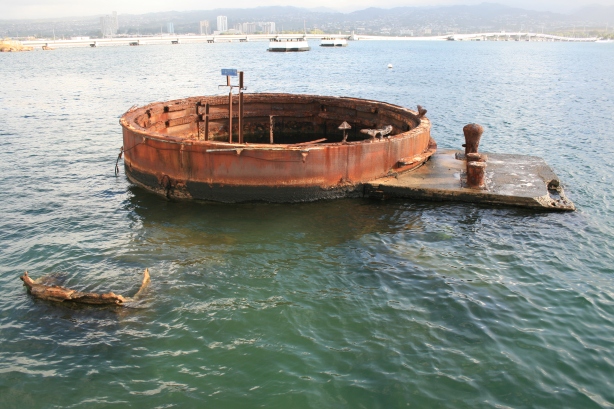 Today Pearl Harbour and its remains are a sombre reminder of a time past but never forgotten. The museum is spread across 16 acres of land on Ford Island and is extremely well designed and full of incredible footage and artefacts.

Our morning started with an audio-guided tour of the museum grounds. We toured the large open spaces filled with replica WWII aircraft, incredible real film footage, information and memorabilia. The highlight of the tour, without doubt, is the boat trip to the USS Arizona Memorial.

On the deck of USS Missouri – Pearl Harbour, Hawaii

Tucked behind the Arizona memorial lies the battleship USS Missouri whose decks witnessed the Japanese surrender. Ordered in 1940 and first decommissioned in 1955, the battleship was re-commissioned and modernized in 1984 and returned to service once again. Decommissioned for the second and final time in ‘92, the Missouri sits with pride against Ford Island.

Strolling along her decks you will find the location of the surrender which took place on 2nd September 1945. Many interesting artefacts from the event are on display.

Wrap up…
It’s well worth the trip out to Pearl Harbour, even though it’s an early start to the day with doors opening at 7am. Tour buses arrive early, so to beat the crowds it’s best to arrive between 630-645am. Even if not a history buff it’s hard to not be impressed with the history in front of you.

Read more from Beach, Destinations, Experiences, Family, History, Travel Tips, USA
hawaii, honolulu
← Top 5 Things To Do In San Francisco
How to travel when in lockdown or quarantine →
4 Comments Post a comment