Known as the country music capital of the world, Nashville is famed for producing many of the world’s best known, and loved, country and rock music stars. And there is no escaping music from this charming southern city.

Even arriving at Nashville’s International Airport, you are often greeted by local singers and songwriters most hours of the day. Nashville’s most famed honky-tonk bar, Tootsie’s, has two locations within the airport alone with live music and cold beer all day long.

Wander through the heart of downtown Nashville and days could disappear as you move through crowded honky-tonk bars – often with more locals than tourists. The lower part of Broadway is referred to as ‘Honky Tonk Highway’ with bars, clubs and live music venues lining the streets.

Actually, Nashville is filled with live music bars and not just restricted to downtown. Throughout the city and suburbs, you will find live music venues 7 days per week, every day of the year.

But what exactly is a honky-tonk bar? Here is the official Nashville Music City tourism body definition: “An establishment that contains at least one rockin’ stage, cold beverages, and a party that lasts all day, every day.” This is my type of town!

So which bar is worth a visit? Well, to be honest, all of them. But here a few that we have tried and recommend.

Arguably Nashville’s most famous and visited bar on the highway, Tootsie’s is an institution. Many famous faces from Kris Kristofferson, Patsy Cline, Dolly Parton, Mel Tillis, Willie Nelson, and many more have lit up the stages over the years. Spanning three stories with four stages and three bars, you can easily rock the night away here. 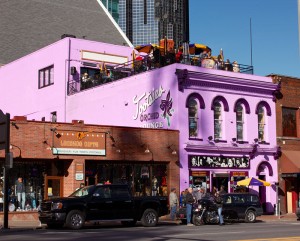 This establishment has earned its name as Honky Tonk Central with three floors, three bars, three stages and three dance floors rocking out every day of the year. A must stop along Honky Tonk Highway.

Country, hillbilly, rockabilly, bluegrass, western, Americana – Layla’s attracts music fans from all over the world with diverse music styles. If you can pluck it, string it, pick it or beat it, then here is where you will hear the music play.

Rock out all night long at Rippy’s over two floors, with the top floor being an outdoor patio overlooking Broadway. Open year-round and all weather conditions accounted for, it’s always good to party under the skies in the open, fresh air.

Like all the Honkey Tonk bars, there are several bars, stages and free-flowing cold beverages, but take the time to enjoy the country music memorabilia and records that line the walls in Legends Corner.

There is something different about Robert’s. Take traditional country music and fuse it with Latin flair and you have the unique sounds of Brazilbilly. A different take and sound on the music that made Nashville famous over two non-stop floors.

Country music served with attitude is the order of the day here. Edgy but fun, all The Second Fiddle cares about is playing fantastic, non-stop country music all day long. Settle in and enjoy the show. 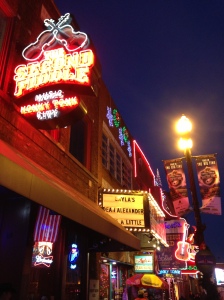 The Stage On Broadway

This is boot scooting nirvana! A huge dancefloor is filled with boot scooters nightly at Stage, so step into your cowboy boots (available just up the street at one of the many boot and hat retailers) and boot scoot to dawn! 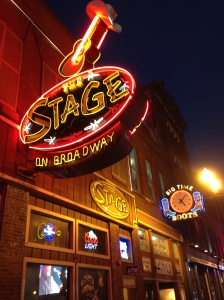 The Stage on Broadway – Nashville, Tennessee. Image by Jason Dutton-Smith

Combining classic country with Southern rock’n’roll, the folks at Nashville Crossroads are not afraid to drop in a rock ballad here or there. Fused music with cold beer and friendly locals is served here.

Rustic, traditional and filled with old-school country music. As for the dance floor, that will be where ever you are standing at the time. Grab your partner, swing them round…..

As its name suggests, this is a serious drinking establishment that pours a stiff drink and plays great music all day on stage. Kick the cowboy boots back and soak in the Jack Daniels whiskey at Whiskey Bent Saloon – made in Tennessee of course.

Which is your favourite Nashville honky-tonk bar? Let us know in the comments below.

And don’t forget to buy the official souvenir….

I honky tonk on Broadway in Nashville, Tennessee. Image by Jason Dutton-Smith