If you’re an ‘avgeek’ (a fan of all things aviation) then there are always must-dos on your fly list – especially the ones that will secure certain bragging rights. It may be flying the latest aircraft from Boeing or Airbus such as the A380, B787 or A350. It could be the elusive First Class, seat 1A on your favourite airline of choice, while for others it may be to fly the world’s longest route. Whichever category strikes your fancy and gets your jet fuel juices flowing the most, the longest flight is one which avgeeks like to discuss as it’s often hotly contested based on how it’s measured.

Boeing and Airbus are constantly developing new and improved aircraft types to fly passengers further, and more economically. This list of the longest flights from America was ranked by their total nautical miles typically flown from point A to B. You may notice some elapsed flying times are shorter on some of the longer routes? This will depend on the direction of travel your journey takes you and the prevailing winds (hence this list is measured in nautical miles).

Let’s take a look at the top 10 longest flights in the world from the United States.

United Airlines has long haul flights spanning the globe with New York being one of the most popular destinations in the world, so it’s no surprise that our list kicks off here first. This route originally belonged to Continental Airlines and since the merger of the two giant carriers, it is now flown by United. Hong Kong’s Cathay Pacific also flies this important route.
Nautical Miles: 6,995
Flight time: 15hrs 50 minutes
Aircraft used: 777-300ER (Cathay Pacific) and 777-200 (United Airlines)

A reasonably new route for Emirates has put them into the number 8 position. Emirates have a world-wide reach and fast becoming one of the largest airlines in the world with several cities now served within the United States.
Nautical Miles: 7,027
Flight time: 15hrs 35 minutes
Aircraft used: 777-300ER

7 – Dallas Forth Worth (DFW) to Hong Kong (HKG) – American Airlines

With their latest long haul route to Hong Kong, American Airlines has made the list at number seven. Their new 777-300ER is a new aircraft for the airline, opening up a host of new long haul routes. Look forward to more route announcements with the delivery of additional aircraft.
Nautical Miles: 7,046
Flight time: 16hrs 50 minutes
Aircraft used: 777-300ER

American Airlines 777-300ER all copyrights to Igor Santorsula via Flickr

Emirates has expanded rapidly and their routes into the US feature heavily on this list. And with two giant oil trading locations such as Houston and Dubai, it’s no surprise that this route is a popular one with business and government travelers alike.
Nautical Miles: 7,083
Flight time: 14hrs 55 minutes
Aircraft used: 777-300ER

Emirates 777-300ER all copyright to Martin Hartland via Flickr

5 – Dallas Forth Worth (DFW) to Brisbane (BNE) – Qantas Airways

This flight is part of Qantas’ Sydney to Dallas flight which is currently served with a 747-400ER aircraft. The outbound sector from Sydney is flown non-stop while the return flight is via Brisbane. With the introduction of the A380 in September, the Sydney to DFW route will be able to flown non-stop in both directions. As of today however, Dallas to Brisbane ranks at number 5 on the list.
Nautical Miles: 7,213
Flight time: 16hrs 05 minutes
Aircraft used: 747-400ER

Los Angeles enjoys the rare distinction of serving every inhabited continent in the world, so naturally LAX features at the top the list.  Utilising the Triple seven’s long range variant on this route, Saudi has been knocked to position number four by a measly 7 nautical miles, being overtaken by Emirates, which we find at position number 3.
Nautical Miles: 7,227
Flight time: 16hrs
Aircraft used: 777-300ER

Saudi 777-300ER all copyright to Liam J McManus via Flickr

Los Angeles and Emirates are featured again with the airline’s long range A380 aircraft operating the almost 16 hour flight to Dubai. No wonder Emirates wins awards for their entertainment system which is definitely required for this flight!
Nautical Miles: 7,233
Flight time: 15hrs 50 minutes
Aircraft used: A380

Photo Courtesy of Emirates – A380

Not to be outdone, fellow U.A.E airline Etihad flies the second longest route between LAX and the capital city of Abu Dhabi. Although using a smaller, yet equally capable aircraft, Etihad picks off Emirates for the number two position by a mere 45 nautical miles.
Nautical Miles: 7,278
Flight time: 16hrs 10 minutes
Aircraft used: 777-200LR 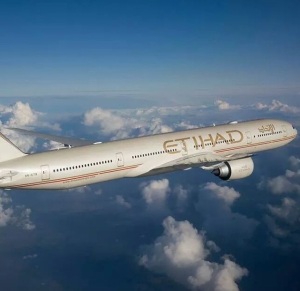 Taking the number one spot for America’s longest flight, Delta Air Lines flies the almost 7,400 mile route between Atlanta and Johannesburg. This is one heck of a journey, and the best thing you can do is sit back, relax and enjoy the flight. Just think of the frequent flyer miles you’ll be earning!
Nautical Miles: 7,329
Flight time: 15hrs 14 minutes
Aircraft used: 777-200LR 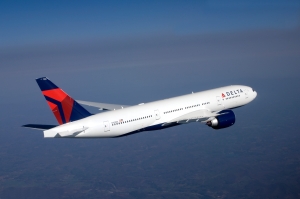 Have you flown any of these routes? Which one would you like to experience? Let us know in the comments field below.