Dubbed the ‘Greatest Spectacle in Racing’, one of the largest motor speedway gatherings in the world will soon be taking place this upcoming Memorial Day. The Indianapolis 500 is steeped in tradition and thrusts this city onto the world stage. With 200 laps, 500 miles and 400,000 spectators crowding the stands, it’s assured to be an adrenaline fuelled good time.

The original Indianapolis Motor Speedway track was a gravel and tar mix completed in 1909 to host small events throughout the year. While successful at drawing crowds in the first year, the crowds started to dwindle after two fatal crashes. This persuaded owner Carl G Fisher to focus on an annual grand event, creating a brick paved track while adding a concrete wall around the tracks circumference.

On Memorial Day, May 30, 1911, the first ‘Indy 500’ was held drawing a record number of 40 starters and a huge 80,000 spectators for the grand race. Ray Harroun, the previous year winner of the Wheeler-Schebler Trophy was piloting a Mormon Model 32-based Wasp racer – which was outfitted with his own remarkable invention, the rear view mirror. Several drivers had declared Harroun a hazard during the race as he was the only single driver without a riding mechanic whose duties would include keeping the driver abreast of surrounding traffic. While another driver protested Harroun as the podium winner, Harroun was eventually declared winner of the first Indianapolis 500. 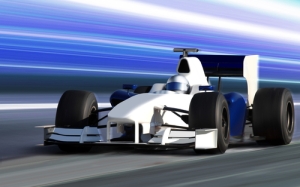 Several traditions are noted each year with the most famous, and obscure, being the tradition of the winner drinking a small bottle of milk in Victory Lane. Starting in 1933 after winning his second race, Louis Meyer requested a glass of buttermilk to refresh him on the hot day after the race. On his third win in 1936 he was snapped by a photographer drinking his buttermilk and an executive of the Milk Federation was so elated he was determined to keep this free marketing franchise going. Even today this tradition is kept alive with drivers of today offered regular milk and their choice of full cream, 2% or skim.

Other traditions include the singing at the start of each race of ‘Back Home Again in Indiana’ and timed with the last notes is the release of multi coloured balloons into the air to signify it’s race time. The national anthem is sung by a guest performer while Florence Henderson traditionally sings ‘America the Beautiful’ and ‘God Bless America’ after the national anthem.

Held over Memorial Day weekend each year in May at the Brickyard Grounds at Indianapolis Motor Speedway, the Indianapolis 500 is an event unto itself that even non motor sport fans will appreciate and enjoy. We will be there live this year so watch this space for blogs from the event.